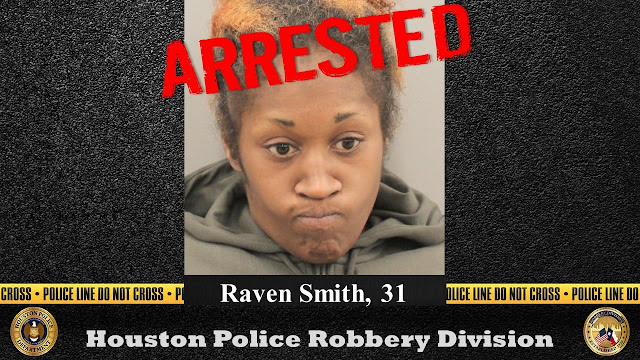 Raven Smith was arrested and booked into the Harris County Jail on 4/5/2021, charged with Agg Robbery-Deadly Weapon.Court documents state Smith and her accomplice, known as “Luana”, entered the EJ Beauty Supply Store. The victim, owner of the store, watched Smith shoplifting items and place them inside a bag/purse. The owner asked to see what was inside the bag but Smith refused and walked out the store. The victim tried to hold on to the purse, pulling it back and forth, but then “Luana” came and handed Smith a tire iron, which Smith used to assault the victim. Smith eventually left behind the bag, fleeing the scene in a vehicle. As Smith drove away, she attempted to run over the victim. Inside the bag was the stolen merchandise. The owner managed to get most of the stolen merchandise back. A witness was able to capture the license plate of the getaway vehicle, which eventually led detectives to the identification of Smith. Records show that Smith’s accomplice, "Luana", has not yet been identified. HPD#166236320Smith's bond was set at $5,000 and was assigned to the 262nd Harris County District Criminal Court. Court Records show Smith was also on two other bonds for Theft during her arrest.#Robbery #Arrested #Shoplifting #Houston #HPD #TireIron #Theft #BeautySupply #Bond 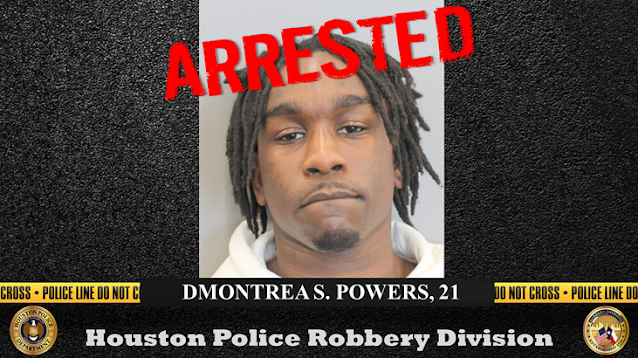 Dmontrea Powers, 21, was arrested and booked into the Harris County Jail on 4/6/2021, charged with Robbery-Bodily Injury.

Charging instrument state Powers was working as an Uber Driver, taking the victim home when he “suddenly stopped” a block away from the victim’s house. Powers informed the victim something was wrong with his vehicle and asked for help. The victim stepped out of the vehicle to assist Powers when suddenly Powers grabbed onto her purse and started pulling it. Powers pulled with enough force that caused the victim to fall forward causing injury. Charging instrument state Powers let go of the “purse because people started looking at them”. He then got in his vehicle and drove away from the location.

Powers bond was set at $20,000 and was assigned to the 232th Harris County District Criminal Court. 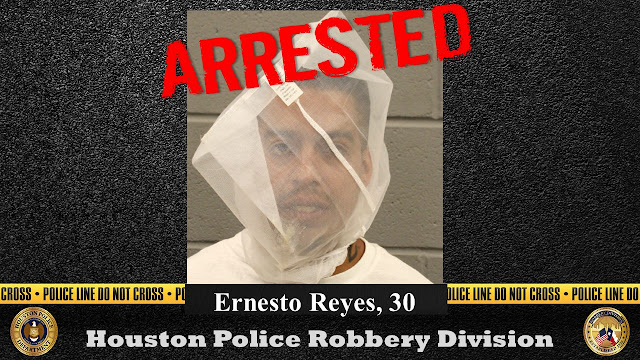 Ernesto Reyes was arrested and booked into the Harris County Jail on 3/15/2021, charged with Robbery-Threats, Harassment of Public Servant, and Retaliation. Reyes bond was set at $2500 ea. and was assigned to the 351st Harris County District Criminal Court. Reyes is currently out on bond.

Charging documents state Reyes approached the victim, who is an employee of the Polar Express Convenience Store, and asked him for money and cigars. When the complainant refused to do so, Reyes told the victim he would “beat him up” if he didn’t give him money. The victim, afraid, called police for help. Officer Miller arrived to the scene and attempted to gather Reyes identifying information. Reyes then spit saliva onto Officer Miller’s face and her uniform shirt. Charging documents also state after Reyes was placed in the back seat of the patrol car he spit on Officer Smith’s face and yelled profanity. As Reyes was being transported to the Harris County Joint Processing Center, Reyes told officers he would kill both of them. 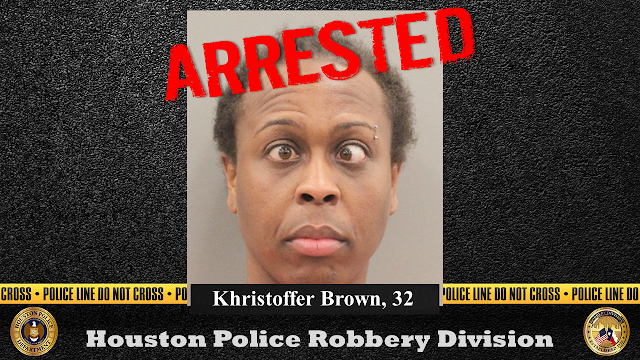 ARRESTED -- Suspect brings dog to the Galleria Mall and commits a Robbery.

On Saturday, January 30th, 2021, Khristoffer Brown walked into a store located inside the Galleria Mall (5085 Westheimer Rd.), along with a dog, and gathered several clothing items worth about $1,018.50. Brown presented a debit card that did not belong to him to the store clerk then walked away towards the exit. The complainant (store clerk) confronted Brown about the non-payment and attempted to retrieve the items. Brown aggressively pushed the female complainant to the ground, causing her to feel pain, and stated he was not going to pay for the merchandise. Eventually, Brown let go of the merchandise and left, but was soon apprehended in the parking garage by police. Brown has been released on $10,000 bond and scheduled to appear in court today, Feb. 2, 2021. HPD Incident #0141951-21
#Arrested #Robbery #HPD #Bandit #GalleriaMall #Bond #Houston #HarrisCounty #HoustonPoliceDepartment 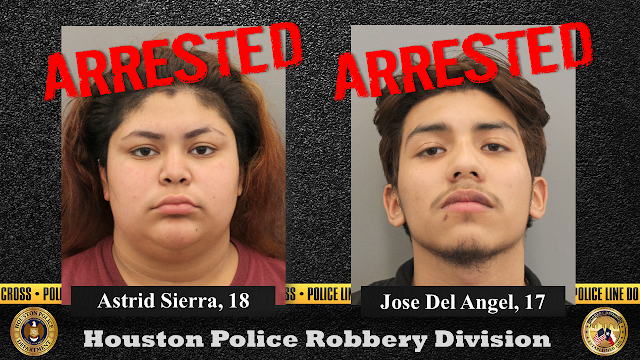 ARRESTED -- Serial robbery suspects arrested after committing and confessing to several aggravated robberies. Suspect was out on bond.
Thank you to our Officers from the South Gessner Crime Suppression Team and our partners at DPS for an excellent, extensive investigation that led to the capture of two violent robbery suspects.
On June 11th, 2020 Sierra broke into an apartment located near 7200 Bellerive Dr. not knowing that someone was inside. 12 year old victim was home alone while his mom briefly left the apartment. The victim heard who he thought was his mother in the kitchen. He walked to the kitchen and was quickly approached by the suspects who had knifes. Suspect Sierra had a knife and told the 12 year old to “relax” while they finished taking personal belongings, keys, and money. The suspects then fled. Sierra would later be arrested when she returned the next day and attempted to steal the victim’s father vehicle.
Research shows Sierra would later be released on Bond and as part of her bond conditions, she was required to wear an ankle monitor. Sierra would go on to later commit three additional aggravated robberies while out on bond on January 3rd, 5th, and 6th, 2021. On January 25th, South Gessner CST Officers, after an extensive investigation, located and detained Sierra along with Del Angel near 11000 Albury at a gas station. CST Officers noted that Sierra was not wearing her court ordered ankle monitor. Sierra and Del Angel would later be interviewed, where they confessed to several robberies. Sierra also demonstrated to officers how she could slip on and off her ankle monitor without damaging it.
Sierra was charged with three counts of aggravated robbery. Del Angel was charged with two counts of aggravated robbery, one count of aggravated assault with a deadly weapon, and one count of unlawful carrying of a weapon. Del Angel was the shooter in an Aggravated Assault with Deadly Weapon incident where he shot at a complainant (store clerk) after a dispute about him shoplifting. Great collaborative work by the South Gessner Crime Suppression Team and the Texas Department of Public Safety.