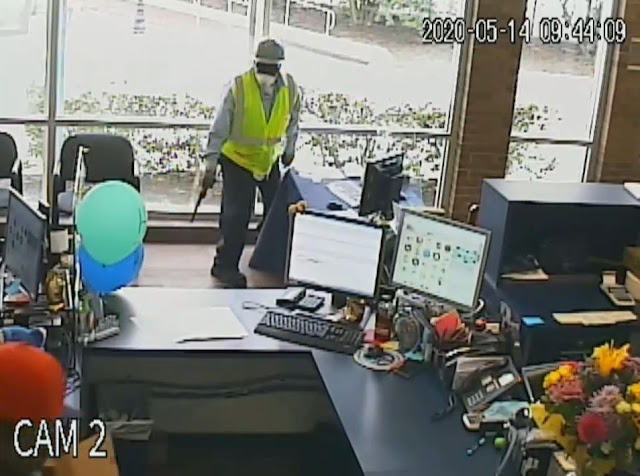 On Thursday, May 14, 2020 at 9:40 am, a robbery occurred at the Together Credit Union located at 775 Gellhorn, in Houston, Texas. Three unknown males entered the credit union wearing masks and armed with pistols. Two suspects approached the teller counter, pointed pistols at the lobby employees and a customer, and ordered them to the ground. One of the suspects then approached the branch manager in a back office and ordered him to open the safe at gunpoint. The suspects collected cash from the safe and then ordered the manager to lay down in the lobby with the other employees. The suspects also collected cash from the teller drawers. After collecting an undisclosed amount of money, all three suspects fled the location in an unknown direction. Houston PD #636862-20 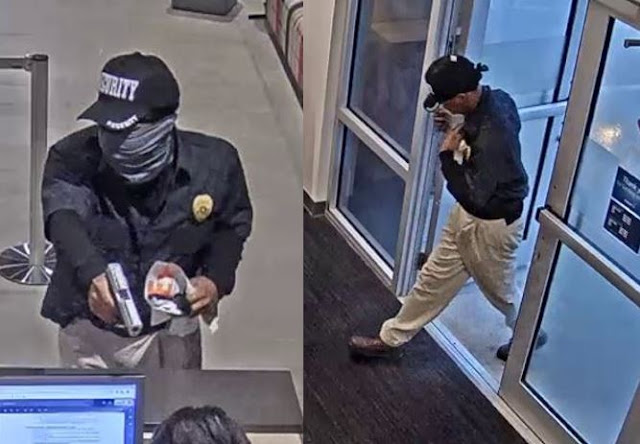 On Wednesday, June 5, 2019, at 9:05 am, an unknown male entered the Capital One Bank located at 11408 Gulf Freeway, Houston, TX. The male was dressed as a security guard and armed with a pistol. The suspect ordered all employees in the lobby to the floor and then made verbal demands for cash while pointing his pistol at the bank’s tellers. The tellers, if fear for their lives, complied and gave the suspect an undisclosed amount of cash, which he placed into a white envelope he had brought with him. The suspect left the location on foot.

The Suspect is described as a black male in his 40s to early 50s, approximately 5’8”-5’10” tall with a thin build. The Suspect wore a black bandana tied around his head and knotted at the back with a black baseball cap over it that said “Security.” The Suspect wore a black, long-sleeved shirt with a gold badge emblem on the front and khaki pants. The suspect carried a silver semi-automatic pistol. HPD case #710246-19 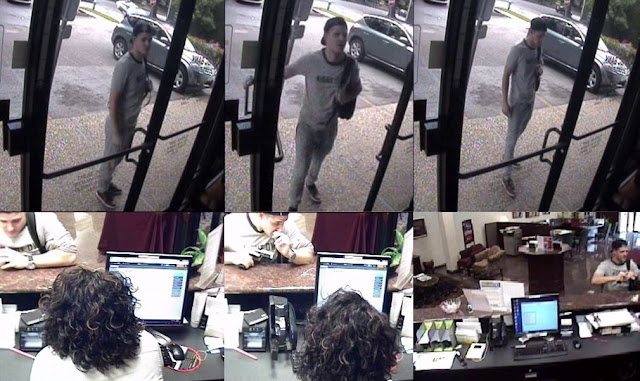 The FBI Violent Crime Task Force needs the public’s help identifying and locating a man, dubbed “Mr. Manners of Montrose,” who robbed an IBC Bank in Houston’s Montrose neighborhood on April 22, 2019. Crime Stoppers of Houston is offering a reward of up to $5,000 for information that leads to the identification and arrest of the robber.

The armed robbery occurred at approximately 3:40 p.m. on Monday, April 22, 2019, at the IBC Bank located at 3939 Montrose Boulevard in southwest Houston, TX.

The suspect entered the IBC Bank, approached the bank teller and demanded money at gunpoint. The suspect fled the bank on foot with an undisclosed amount of cash. While leaving the bank, he thanked bank employees and customers and told them to “have a good day.” He was last seen heading east on Sul Ross Street. No one was physically hurt during the robbery. Investigators say minutes before robbing the IBC Bank, the suspect robbed the CVS located at 1003 Richmond Avenue.

The male is described as a white male in his 20’s, with an athletic build, approximately 5’8” tall, wearing a grey t-shirt, grey pants, and a baseball cap turned backwards. Investigators believe the suspect may have a tattoo on his left forearm, not visible in the photographs.

Crime Stoppers of Houston is offering up to $5,000 for information leading to the identification and arrest of this robber. If you have any information, please call the Crime Stoppers tip line at 713-222-TIPS (8477) or the FBI Houston Field Office at (713) 693-5000. Tips may also be submitted to Crime Stoppers through their website, www.crime-stoppers.org, or the Houston Crime Stoppers mobile phone app which can be downloaded for both iPhone and Android devices. All tipsters remain anonymous. 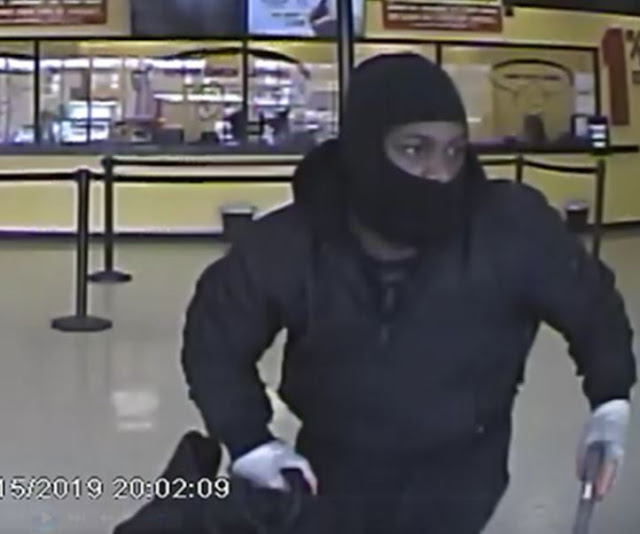 On Friday, March 15, 2019, at 12:51 pm, Dunbar Armored was making a scheduled delivery at Senor 1% Check Cashing, 6101 Glenmont. The courier entered the business when two masked suspects approached him, one armed with a pistol and the other an assault rifle. The lead suspect, armed with a pistol demanded the currency and fired his weapon at the courier, nearly striking him.

The suspects fled in a 2002 Black Ford F250 Pickup Truck which is listed as stolen. The suspects were last seen driving westbound on Glenmont from the location. There were minor injuries as a result of this incident. 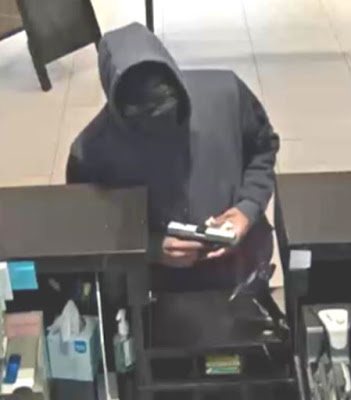 The FBI Violent Crime Task Force needs the public’s help identifying and locating the man who robbed the Capital One Bank at 1629 S. Voss Rd. on March 4, 2019. Crime Stoppers of Houston will offer a reward of up to $5,000 for information that leads to the identification and arrest of the bank robber. The armed suspect entered the bank at approximately 9:04 a.m., just a few minutes after the bank opened for business on Monday, March 04, 2019. Upon entering the building, he pulled a mask over his face, headed toward the teller counter, and demanded money. The teller, in fear for her life, gave the suspect an undisclosed amount of cash. The robber left the bank on foot, south-bound through the shopping center. There were no reported injuries. The bank robber is described as a black male, 30-40 years old, approximately 5’7” – 5’8” tall, and of average build. He wore a black hooded sweatshirt, black pants, and a black or gray bandana.

On Thursday, February 21, 2019, at approximately 4:36 p.m., two black male suspects and one black female suspect entered the Capital One Bank located at 15900 Stuebner Airline Rd. in Spring, TX. The trio swarmed the bank and ordered customers and employees into a back room and on to the floor before jumping over the teller counter and demanding money and the keys to open the teller drawers. The suspects eventually left the bank without any money, after the keys could not be located. No vehicle or direction of travel was observed, and no injuries were reported.

The following day, on Friday, February 22, 2019, at approximately 4:05 p.m., the trio entered the Capital One Bank at 6117 N. Highway 6 in northwest Houston. Armed with pistols and a knife, they swarmed the bank and ordered customers and employees into a back room and on to the floor. The suspects jumped over the teller counter and demanded money and the keys to open the teller drawers. In fear for their lives, bank employees gave the suspects the keys to the registers. After collecting an undisclosed amount of cash, the suspects left the bank. Minor injuries were reported.

Investigators believe at least one member of this crew is responsible for two other Capital One Bank robberies that occurred on October 2, 2018 and November 19, 2018 at 19619 Tomball Pkwy and 10951 Jones Rd., respectively.
The suspects are described as follows:

CLOTHING: On 2/22/19, the suspect wore a black hoodie with the hood up, a yellow reflective safety vest, blue jeans, and black tennis shoes. He was armed with a semi-automatic pistol.

CLOTHING: On 2/22/19, the suspect wore a black hoodie with the hood up, a tan short-sleeved shirt over the hoodie, matching tan pants, and a black mask over his face. He was armed with a semi-automatic pistol.

CLOTHING: On 2/22/19, the suspect wore a dark green hooded jacket with the hood up, ripped skinny jeans, a black ski mask, and high top black and gray sneakers. She was armed with a knife.

On Wednesday, January 23, 2019 at 9:59 am, a Hispanic male entered the Chase Bank, located at 16802 El Camino Real, in Houston, Texas. The male approached a teller station while holding a rifle and a bag and immediately told the teller to place the money in the bag. The teller complied with the suspect, at which time the suspect left the location and got into a silver two door Infiniti G37. HPD case #98059-19
The suspect then drove to the Chase bank at 1200 Clear Lake Blvd. at 10:30 am and committed a second robbery in the same manner as the first. HPD case #98203-19 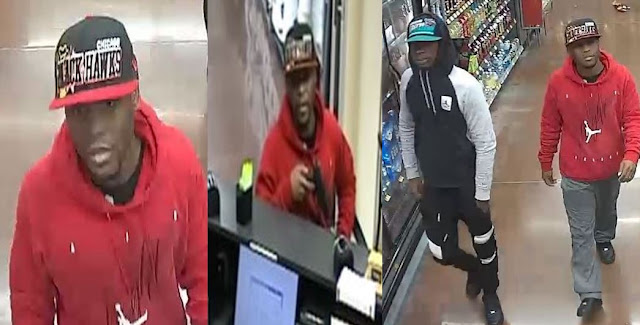 On Thursday, January 10, 2019, at approximately 1905 hours, two unknown black male suspects entered the Woodforest Bank located inside a Wal-Mart at 9700 Hillcroft Ave and approached the teller counter. One suspect made a verbal demand for cash while displaying a pistol to the teller while the other suspect displayed a note to the teller demanding cash. The teller, fearing for her safety and the safety of other employees, gave the suspects an undisclosed amount of cash and the suspects left the bank/Wal-Mart. Suspects were observed on Wal=Mart surveillance leaving the parking lot in a dark blue sedan. No injuries were reported. HPD case #43089-19 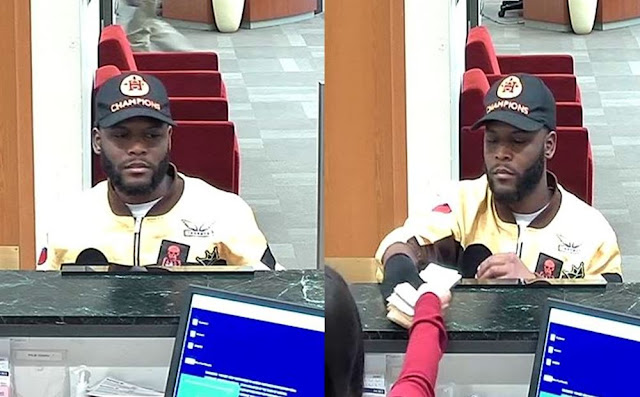 On Thursday, December 27, 2018 at 10:26 am, an unknown black male entered the Bank of America, located 9660 Hillcroft, in Houston, Harris County. The male walked up to the teller counter and handed the teller a note stating that this was a robbery and that he wanted the money from the cash drawer . The teller felt in fear for her life and gave the male the cash. The suspect then casually walked out of the bank in an unknown direction. HPD case #1629095-18 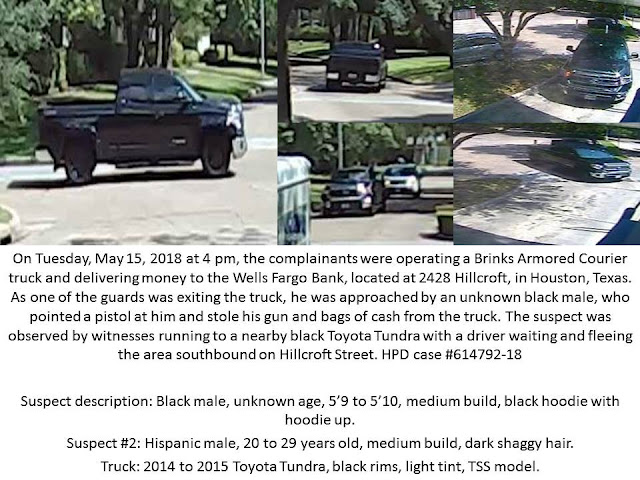 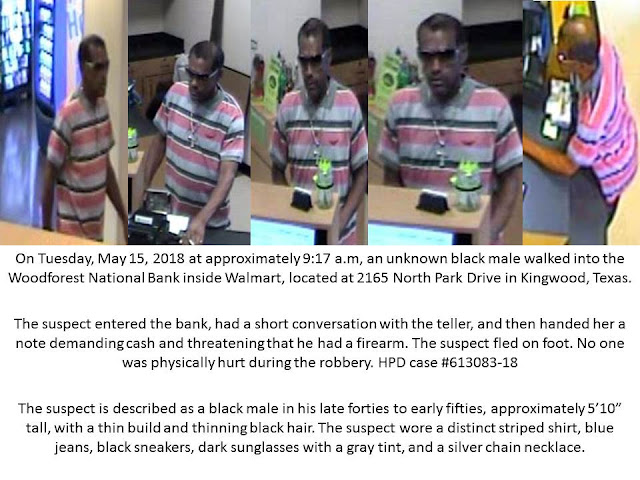 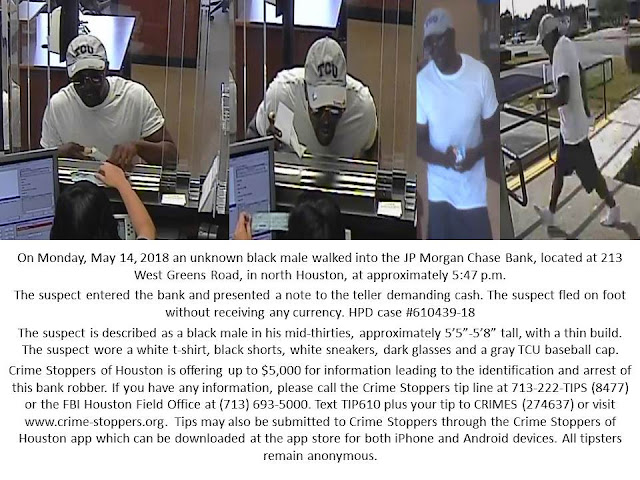 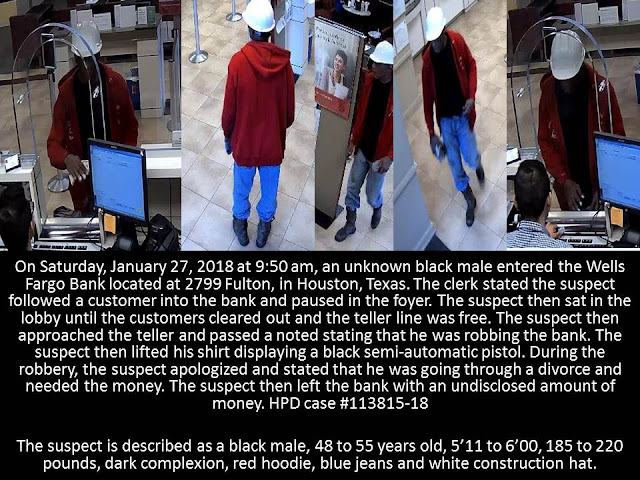 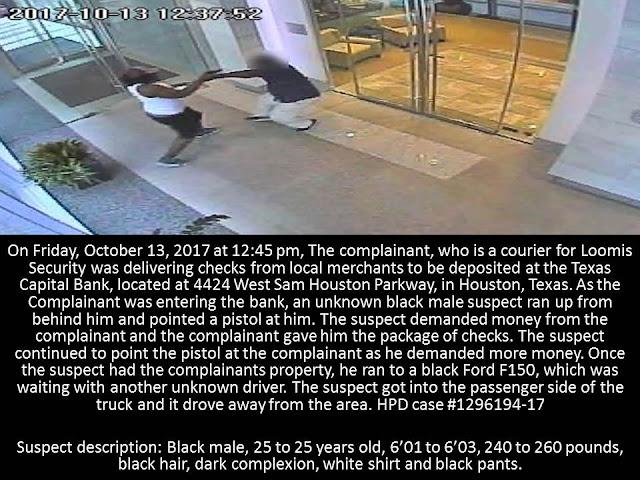 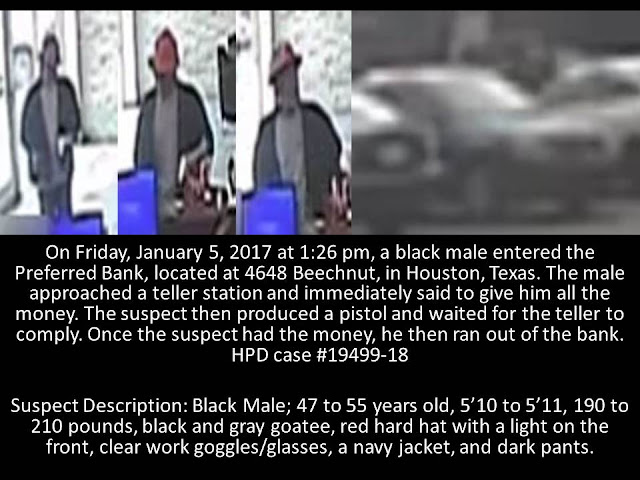 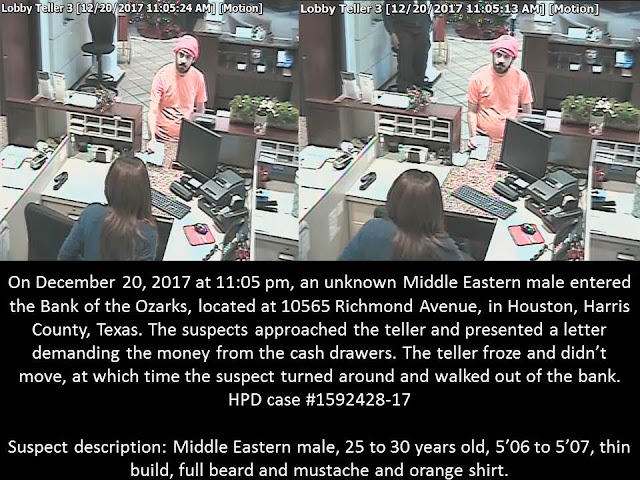 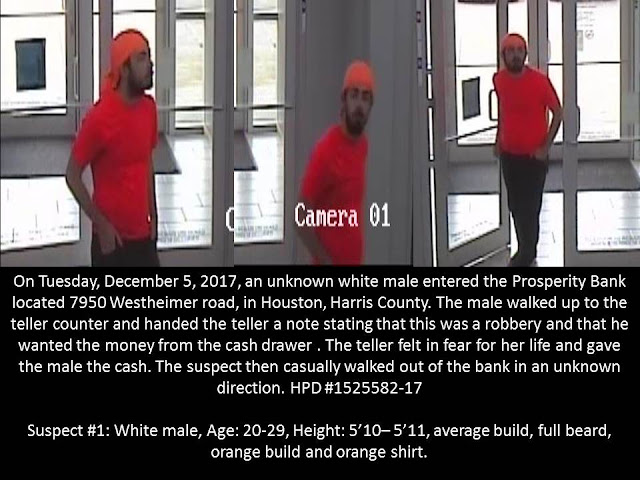 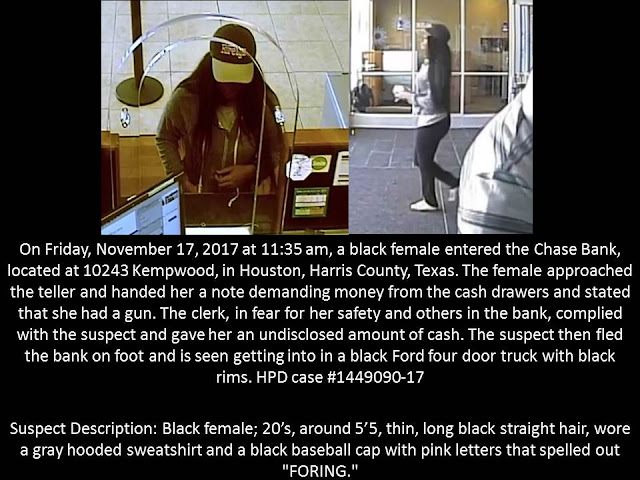 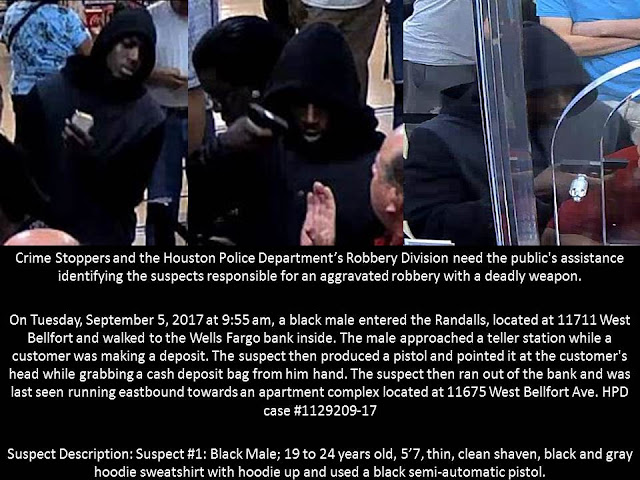 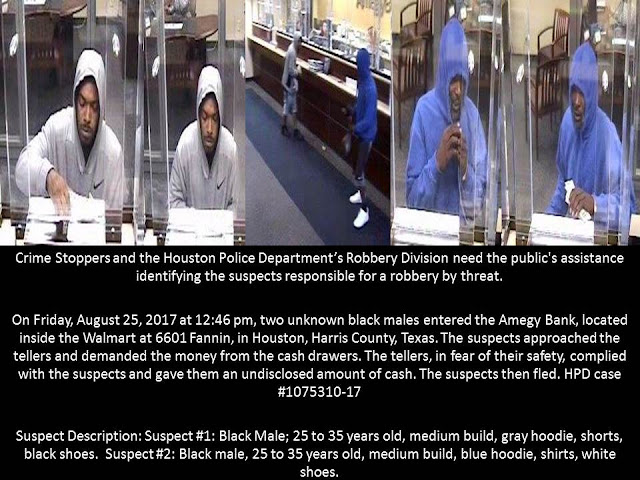 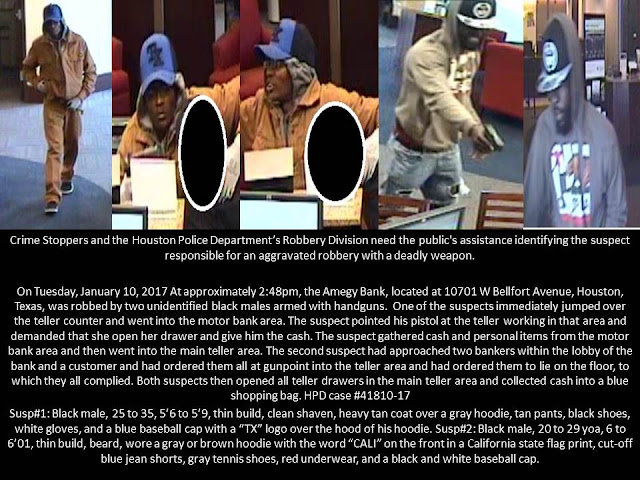 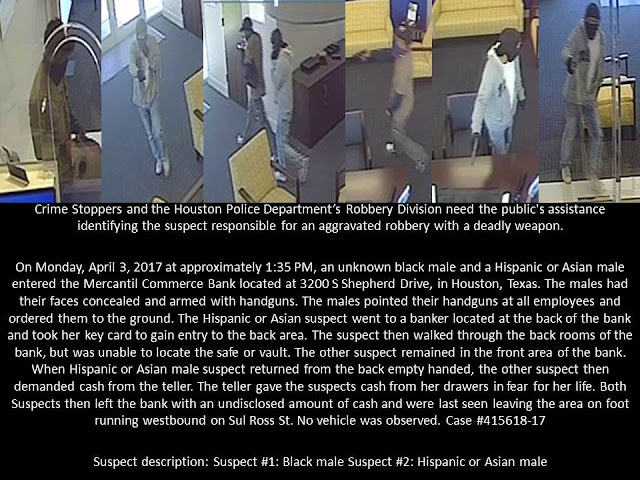 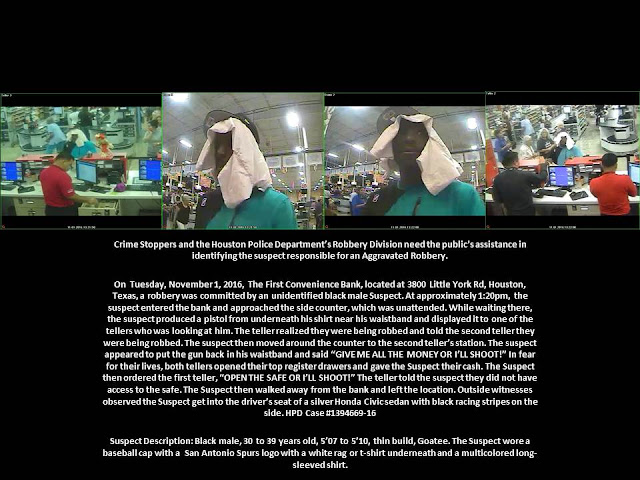 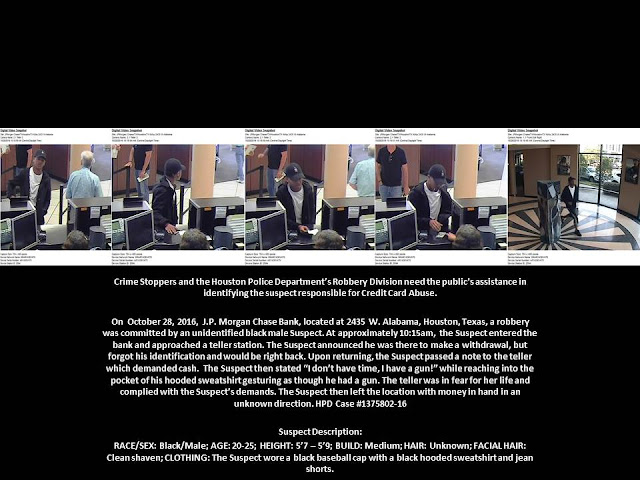