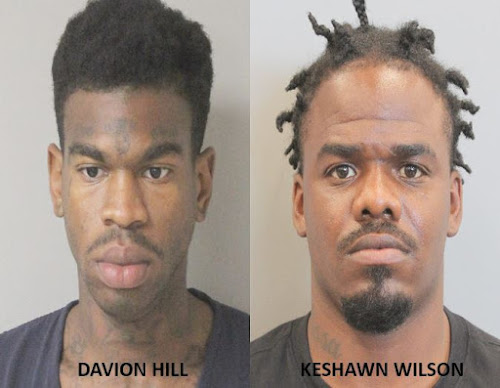 On August 8, 2020, Houston Police Officers from the Westside Patrol Division responded to a purse snatching/robbery involving two suspects, later identified as Davion Hill and Keshawn Wilson. Hill and Wilson forcibly grabbed a woman’s purse as she was entering an apartment complex located at 2800 South Dairy Ashford. When the victim tried to keep her purse, Wilson dragged her on the ground and then pulled out a gun and pointed it at her head. Once they had the victim’s purse, Hill and Wilson then got into a car and fled the scene.  A witness observed the incident, notified 911, and safely followed the suspects to a gas station. As Wilson attempted to use the woman’s credit card to pay for gas, officers quickly surrounded both suspects and took them into custody. Patrol officers conducted a follow up investigation, at which time Davion Hill and Keshawn Wilson were both charged with aggravated robbery – deadly weapon and fraudulent use of identifying information. Incident #1042491-20

Hill has a history dating to 2012, which includes two felony convictions and sentenced to prison in 2013 for burglary of a habitation.

Wilson has an extensive history in multiple states.  In Harris County, he has prior felony convictions for evading arrest (vehicle) and credit card abuse (2019).  At the time of the arrest, Wilson was on bail for aggravated assault/deadly weapon. Subsequent to this arrest, he was charged with aggravated assault/family member and violation of protective order following an August 7, 2020 shooting.

Both Hill and Wilson were given bail on the new charges and are now fugitives after failing to appear in court.