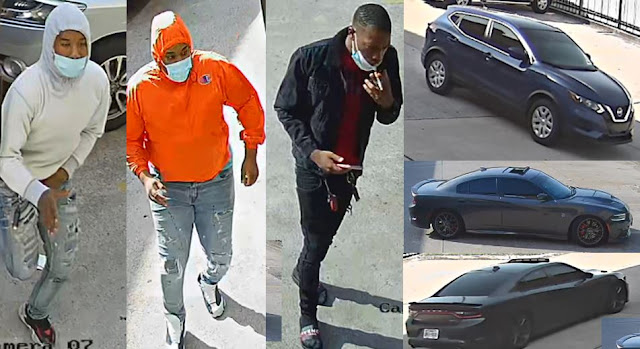 Crime Stoppers and the Houston Police Department’s Robbery Division need the public's assistance identifying the suspects responsible for a robbery by force.

On Tuesday, October 13, 2020 at 10:15 am, a UPS employee was delivering packages of prescription medicine at the Bizmart Pharmacy, located at 9504 Long Point, in Houston, Texas. As the delivery driver was dropping off two packages, he noticed an unknown male approaching his open truck. The complainant stated that something didn’t feel right about the male walking towards him, so he set the packages down at the front door of the pharmacy and began walking back towards his truck, at which time two additional males appeared and pinned him against his truck and held him there while the other suspect grabbed the packages at the door. During the robbery, one of the suspect stated that they had a gun and threatened the complainant if he resisted. The suspects then ran back to a blue Nissan Rogue and a dark colored Dodge Charger and fled the scene. Houston PD #1359182-20

The same suspects are believed to be responsible for another robbery a few hours later at the same location. In that robbery, a FedEx employee was delivering a package to the pharmacy when two unknown males ran up to him and forcibly grabbed the package that he was delivering. The suspects then ran back to the Dodge Charger and fled the scene. Houston PD #1359636-20