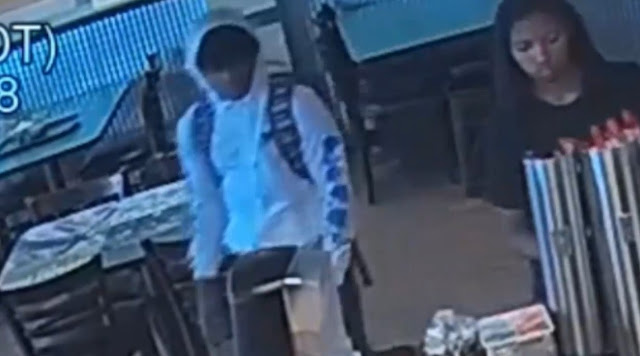 On September 12, 2021, at about 6:00 pm, a male entered a cell phone store, located at the 8300 block of Broadway, in Houston, Texas.  The male approached an employee, pulled out a handgun, and then demanded cell phones and money from within the store. The suspect took the items and fled the location on foot. (Incident not captured on camera) Houston PD #1233699-21

During the investigation, it was determined that the male had been inside of a neighboring business with a possible a female accomplice. The video further captured the movement of the same male as he walked past the neighboring business, toward the cell phone store, and then ran in the opposite direction following the robbery.

Suspect #1 is described as a black male, about 5’5 to 5’9, 140-150 pounds, wearing a white hoodie, black pants, black shoes, possibly a black beanie, with a distinctive, multi-colored back pack.

The Houston Police Robbery Division is seeking the identity of the black female, who is described as 5’5 to 5’9, 120 to130 pounds, wearing a black t-shirt, black shorts, and black slide sandals with red and white trim.  She was observed communicating directly with the suspect just prior to the robbery and appeared to be coordinating with him.