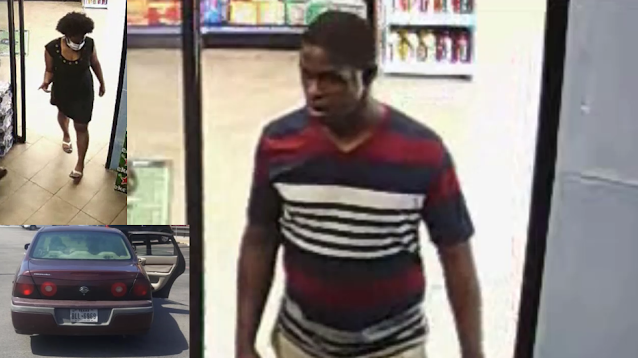 On Wednesday, October 6, 2021 at 1:20 pm, an unknown male and female walked into a convenience store, located at the 11200 block of Beechnut, in Houston, Texas. The male and female grabbed several 18 packs of beer and walked out of the store without attempting to pay for them. As the suspects were leaving, the clerk tried to stop them at the door, at which time the male suspect threatened to kill the clerk if he did not get out of his way. As the female suspect was leaving, the clerk was able to take at least one of the cases of beer from her. The suspects then got into a maroon Chevrolet Impala, driven by a third male suspect, and fled the scene. HPD case #1346332-21

Note: The license plate to the vehicle was last registered in 2014 and no longer belongs to the registered owner. The current owner of the vehicle is unknown.