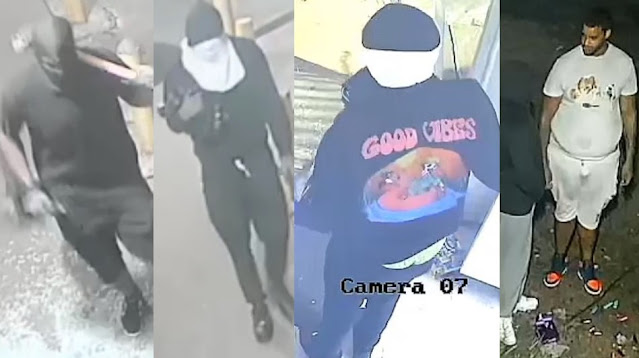 On Thursday, August 11, 2022 at around 4:40 am, five unknown males forced entry into a convenience store by tying a chain to the front doors and then pulling it open with a white Ford flatbed truck (not shown on camera), at the 6800 block of Cullen, in Houston, Texas. A few minutes later, the suspects ran into the business with black trash bags and began to fill them up with merchandise from within the store. One of the suspects was armed with a saw and attempted to pry open the ATM, but was unable to gain access into the machine. While this was happening, the store owner pulled up to the front of the store while on the phone with 911. The suspects saw the complainant and confronted him in the parking lot, punching him in the face numerous times while taking his cell phone. The suspects then tried to take the complainants vehicle but were unable to locate the keys. The suspects then fled the location in an unknown direction. Houston PD #1069655-22

Note: During the entire robbery, a sixth male wearing a white shirt and white shorts, stood on the side of the building and stood as a lookout and remained on the phone communicating with the suspects while inside the store.