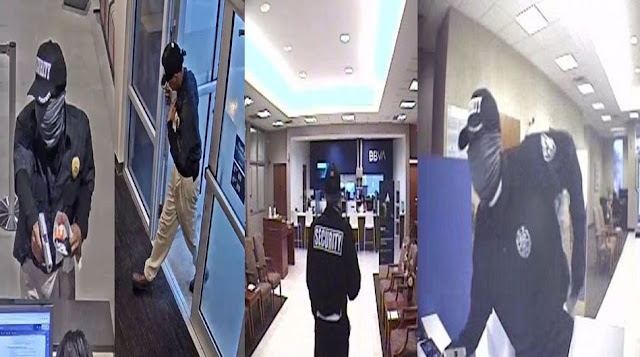 The FBI Violent Crime Task Force needs the public’s help identifying and locating a man, dubbed “Security not Security Guard,” who has robbed two Houston banks since June 5th. Crime Stoppers of Houston is offering a reward of up to $5,000 for information that leads to the identification and arrest of the robber.

On Wednesday, June 5, 2019, at the Capital One Bank located at 11408 Gulf Freeway, in Houston, Texas, a robbery was committed by an unknown male.

At 9:05am, the male, wearing a security guard uniform, entered the ATM area and pulled a mask up to cover his face. The suspect then opened the main doors to the bank and immediately produced a pistol, which he pointed at bank employees. The suspect ordered the employees in the lobby to the ground and then ordered the two tellers to give him cash. The suspect collected the cash from the tellers and placed it into a Fed-Ex envelope he had brought with him. The suspect left the location with an undisclosed amount of money. Houston PD #710246-19.

At 11:42am, the male, wearing a security guard uniform, entered the bank and pulled a mask up to cover his face. The male then approached the teller line producing a pistol, which he pointed at bank employees. The suspect told the tellers to "DO IT QUICK AND DON'T DO ANYTHING ELSE" while holding the weapon in his right hand. The complainant quickly hit the panic button and hid under the teller counter. The suspect left the bank without any money. Houston PD #1224279-19.

Suspect description: Black male, 40 to 50 years old, 5’8 to 5’10, thin build, wore a black bandana tied around his head and knotted at the back with a black baseball cap over it that said “Security.” black long-sleeved shirt with a gold badge emblem on the front. The suspect carried a silver semi-automatic pistol.