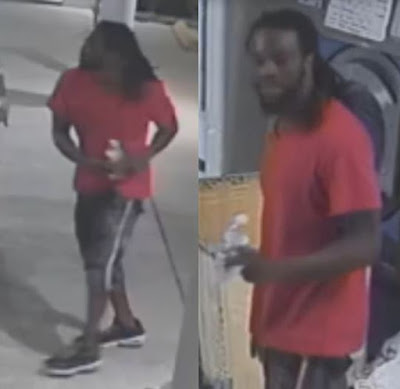 Crime Stoppers and the Houston Police Department’s Robbery Division need the public's assistance identifying the suspect responsible for a robbery.

On Sunday, September 6, 2020 at around 5:00 am, an unknown male entered the parking lot at the Palace Inn located at 9317 West Sam Houston Parkway, in Houston, Texas. The male walked into the laundry room of the hotel and approached the complainant, who works in housekeeping.  The complainant told the unknown male that he could not be smoking in there and he had to leave the room, at which time he became irate and demanded her car keys. The complainant said the male asked her if she is scared and then saw her car keys lying on the table, grabbed them, and told her that he would kill her if she got in his way. The complainant said the male took her keys, located her vehicle with the remote and got into the truck. The suspect then backed up; hit another vehicle parked in the parking lot, and then sped out off. Houston PD #1181069-20.

The complainant’s vehicle was recovered unoccupied by patrol officers at 1700 Clay Street on September 13.

Suspect description: Black male, 5’10 to 6’1, with long dreads, and he was wearing a red shirt and black shorts.