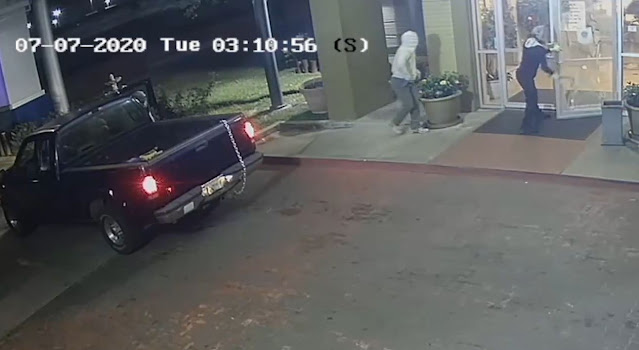 On Tuesday, July 7, 2020 at 3:26 am, four unknown males pulled into the America’s Inn Hotel in a Ford F-250 truck, located at 10552 Southwest Freeway, in Houston, Texas. Three of the males exited the vehicle while the driver remained in the driver’s seat. One of the suspects was holding a crowbar and shattered the window to the front door as he entered the lobby. The hotel clerk heard the glass shatter and ran to the back office while the suspect with the crowbar yelled at him to stay where he was. The suspect with the crowbar then jumped over the counter and at the same time, an armed security guard exited a bathroom and pointed her duty weapon at the suspect. The suspect then put his hand into the air and then jumped back over the counter and ran out of the lobby. While this was happening, the other two suspects had a chain connected to the rear of the truck and were preparing to attach it to an ATM in the lobby. Once all of the suspects realized that there was an armed security guard, they all fled the location. Houston PD #891483-20

Suspect descriptions: Two of the suspects were described as black males while the race of the other two males were unknown.