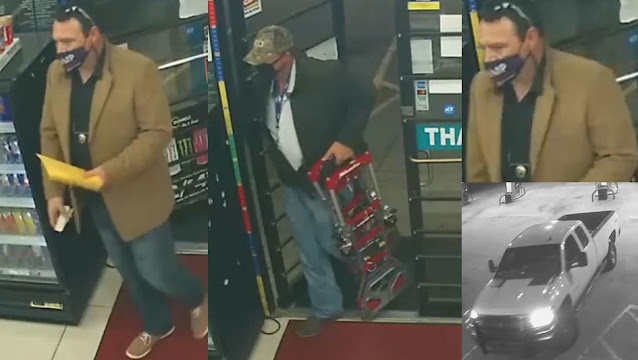 On Tuesday, October 27, 2020 at 8:20 pm, two unknown males walked into the Valero, located at 6915 Telephone, in Houston, Texas. Both of the males identified themselves at detectives with the gaming commission authority and informed the clerk that they had a seizure order stating that they were there to confiscate the gaming machines due to illegal gambling. The clerk stated that the suspects both had badges and were both carrying handguns that were holstered. Both of the males then placed the gaming machines onto dollies, loaded them into a white Chevrolet 2500 extended cab, and quickly fled the scene. Houston PD #1426695-20

Notes: Texas does not have a state gaming commission. The “seizure order” that was presented to the clerk had what appeared to have an official stamp and had a signature with a fake judge’s name. It is possible that the suspects have done this before and the victims may not have reported the crimes. The gaming machines are each valued at $2500 and the clerk was unaware of the amount of money that was in each machine when they were taken.

Impersonating a public servant is a third degree felony and punishable up to ten years in prison.