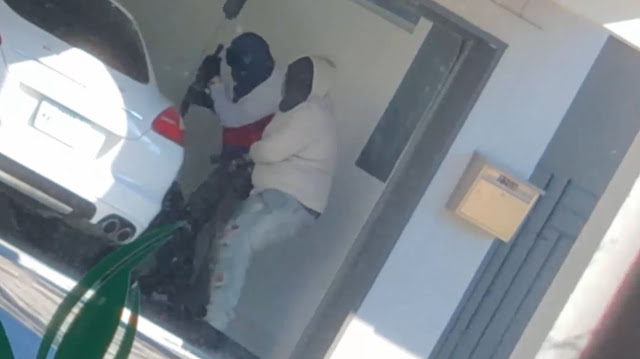 On Thursday, December 17, 2020 at around 2:00 pm, the complainant was arriving home at the 2000 block of Cohn after taking an Uber from a jewelry store on Richmond Avenue. The complainant stated that as exited the Uber, he noticed a black Dodge Charger pull up near his driveway and noticed that the front two occupants were putting masks over their heads. The complainant stated that he then tried to run into his house and was stopped by the suspects, who were both armed, one with an assault rifle and the other with a handgun. The suspect with the assault rifle struck the complainant in the head multiple times, causing him to fall to the ground in his garage. The suspects then took a bag that the complainant was holding along with the jewelry that he was wearing. The suspects then both ran back to the Dodge Charger and fled the scene. Houston PD #1677153-20

The incident was captured on a doorbell camera across the street and was also recorded by a neighbors cell phone, who witnessed the incident as it was occurring.