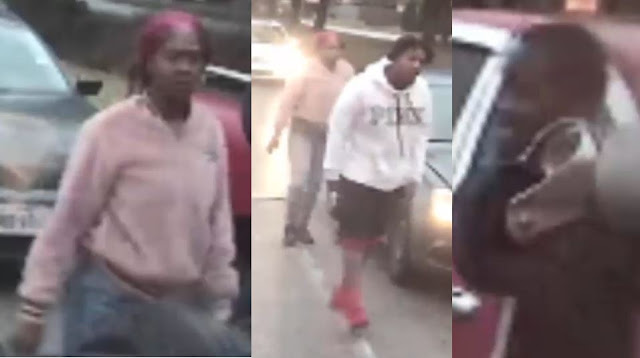 On Monday, March 1, 2021 at around 5:45 pm, the complainant was driving his red Ram truck at the 3700 block of South Gessner, in Houston, Texas. The complainant stated that he was rear ended by a gray Volkswagen occupied by two females, one of which had red hair. The complainant added that the females were apparently being followed by two males in a white Ford F-250, at which time that vehicle parked in a nearby parking lot and the two males walked up to the accident scene and joined the two females. The males then began to hit the complainants red Ram truck with a tire iron while the female with the red hair removed a tire compressor from the rear of the truck and placed it in the Volkswagen. The male suspects then went through the complainants pockets and took any property that he had on him.

While this was happening, a wrecker driver pulled up to the scene while already towing a vehicle. The female with the red hair then handed one of the male suspects a handgun and as the male approached the wrecker driver while holding the gun, the female with the red hair attempted to open the door of the vehicle that was being towed, but was unable to get into it. The suspect with the gun then turned his attention towards a crowd of people watching the scene unfold and approached them in an attempt to start a confrontation.

The two males and two females then all got into the gray Volkswagen and fled the scene before police arrived. The white Ford truck that the two males were driving turned out to be stolen. According to witnesses at that scene, a black female with red hair had stolen the truck on February 26 at the 7700 block of the Eastex Freeway at a gas station parking lot. Houston PD #279593-21