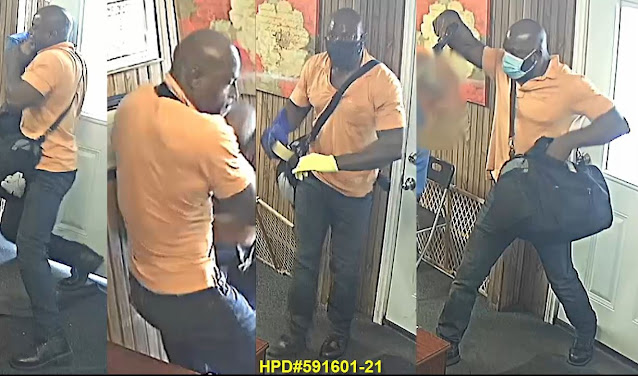 On Tuesday, May 4, 2021 at around 11:00 am, a 68 year old complainant was inside his office at an auto sales business, located at the 6700 block of Telephone, in Houston, Texas. The complainant stated that someone knocked on the door after realizing it was locked, so he unlocked it, thinking it was a potential customer. The male then forced his way into the business while armed with a handgun. The complainant then tried to get away from the suspect and run out of the business, but the suspect was able to overpower him and forced him to the ground. During the struggle, the suspect pulled out a crowbar from his bag and began to hit the complainant in the head with it, causing a severe laceration. The suspect then forced the complainant into an office, tied him up, and then dragged him from one office to another. The suspect went rummaged throughout the office looking for money. After the suspect was not able to locate any money in the office, he took the complainants wallet and phone and fled the location, Houston PD #591601-21