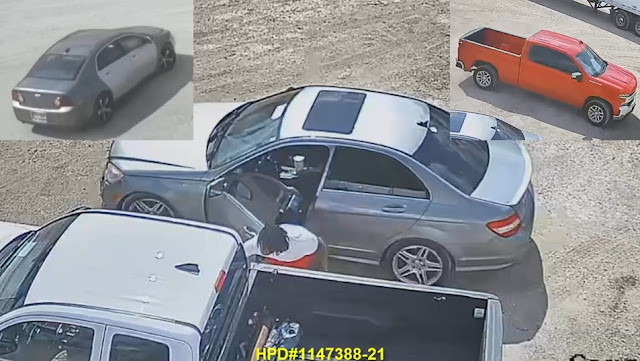 On Wednesday, August 25, 2021 at around 11:00 am, the complainant had just parked his vehicle at his business, located at the 1800 block of McCarty, in Houston, Texas. The complainant stated that he stopped his vehicle next to one of his drivers and exited the driver’s seat so he could briefly talk to his employee.

The complainant stated that a silver Mercedes four-door sedan pulled up next to his vehicle, a male exited the driver’s seat, opened his passenger door, and grabbed a moneybag from inside his vehicle.

While this was happening, a red Chevrolet Silverado pickup pulled up near them as the passenger pointed an assault rifle towards the complainant and his employee. The suspect in the Mercedes then got back into his vehicle and the suspects quickly fled the scene. A third vehicle, described as a silver Chevrolet Malibu had also driven into the parking lot at the same time and appeared to be the lookouts as the robbery was happening. Houston PD #1147388-21

The victim stated that he is a business owner and had just withdrawn a large sum of money from a bank just prior to the robbery occurring. The victim added that he saw the silver Chevrolet Malibu in the parking lot at the bank and saw it leave as he left, but did not realize that he was being followed.

Silver Chevrolet Malibu with mismatched doors on the passenger side.