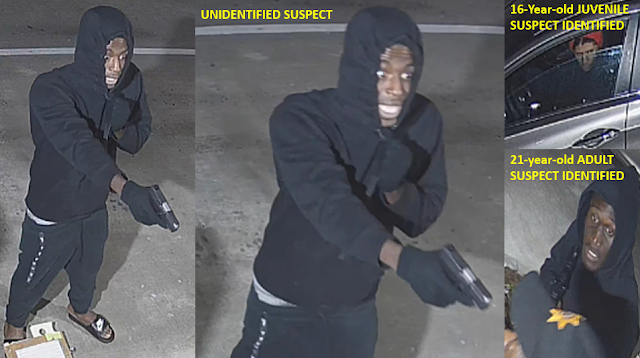 On Tuesday, April 26, 2022 at 12:00 am, the complainant, a security guard, was working in a guard shack at the entrance to an apartment complex at the 2800 block of Holly Hall, in Houston, Texas. The complainant stated that an unknown male, later identified as a juvenile, pulled up to the gate entrance in a four-door Hyundai, at which time, the complainant exited the guard shack. Two unknown males then walked up behind the complainant, both armed with guns, and forced him to the ground. The suspects then demanded the security guards money and firearm, but he informed them that he did not carry a gun and that he had no money. The suspects then ran to the awaiting vehicle, being driven by the juvenile suspect, and fled the location. Houston PD #548379-22

Several days later, a Harris County Sheriff’s Deputy conducted a traffic stop on the four-door Hyundai involved in this robbery. The Deputy learned that the vehicle was stolen and placed a 16-year-old juvenile suspect and a 21-year-old male suspect into custody and charged them both with unauthorized use of a motor vehicle.

A follow up investigation was conducted by the Houston Police Robbery Division, which revealed that the 16-year-old male was the driver of the Hyundai during the robbery (mentioned above) and the 21-year-old male was the suspect holding the rifle while robbing the security guard. The third suspect, armed with a handgun, has not yet been identified in this case. Robbery charges are currently pending on the two suspects that have been identified.