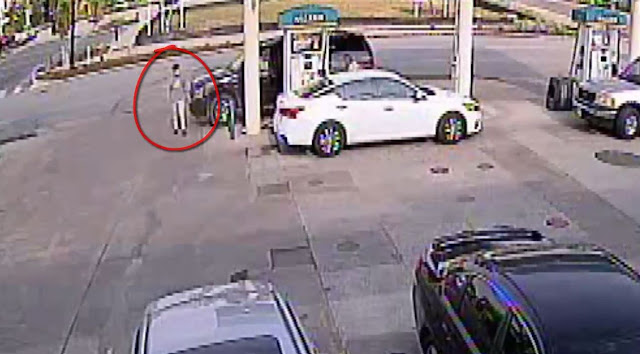 On Tuesday, August 4, 2020 at 8:30 am, an elderly (70 years old) female complainant was walking to her vehicle in the Kroger parking lot, located at 1440 Studemont, in Houston, Texas. The complainant stated that she was pushed from behind by an unknown male, who then grabbed her wallet. The suspect ran to a black Chevrolet Tahoe and fled the scene. Houston PD #1022516-20 (No video available of this incident)

On Tuesday, August 4, 2020 at 9:05 am, the complainant was at the gas pumps at the Valero, located at 1544 N. Shepherd, in Houston, Texas. The complainant stated that while he was standing next to his car, an unknown male approached him and tried to take his wallet from his hand. The suspect was unable to get the complainants wallet, so he ran back to a 2000 to 2007 Chevrolet Tahoe and fled the scene. Houston PD #1022662-20 (video of incident)

On Tuesday, August 4, 2020 at 9:30 am, an elderly female complainant (72 years old) was walking in the parking lot at the Aldi, located at 3938 N. Shepherd, in Houston, Texas. The complainant stated that she was approached by a black SUV. A male suspect exited the vehicle, punched her in the jaw and began pulling on her purse. The complainant was forced to let go of her purse, allowing the suspect to take it. The suspects then fled the scene in a black SUV. Houston PD #1022752-20 (No video available of this incident)