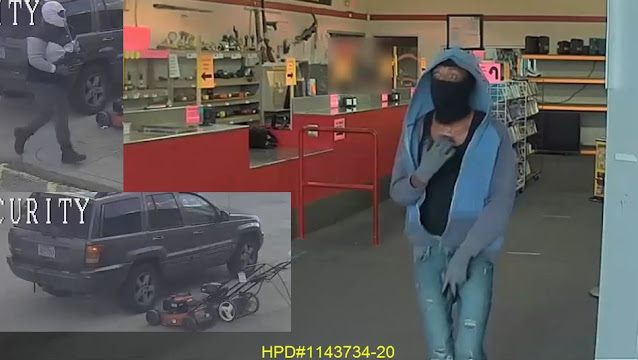 On Saturday, August 29, 2020 at around 4:33 pm, three unknown males pulled up to the front of a pawnshop located at the 8000 block of the North Freeway, in Houston, Texas. One of the suspects exited the passenger door of gray Jeep Grand Cherokee and ran into the business while armed with a handgun. The other two suspects then exited the vehicle and were about to follow. As the first suspect ran into the pawnshop, he saw a security guard inside the store and quickly turned around while signaling to the other suspects to call off the robbery. The suspect then ran back to the Jeep and the suspects fled the scene. Houston PD #1143734-20

On both robberies, the suspects were successful and ran into the pawnshops while in possession of handguns and rifles/or shotguns and forced the employees to the ground. The suspects took jewelry in both cases and on the September 16 robbery; the suspects also stole numerous firearms from the pawnshop.

The method of operation (MO) of the robberies is always the same, but at this time, it is unclear as to how many suspects are involved. It appears as though this could be a crew of various suspects using a different vehicle in each robbery.