Crew Could be Responsible for Upward to 20 Robberies 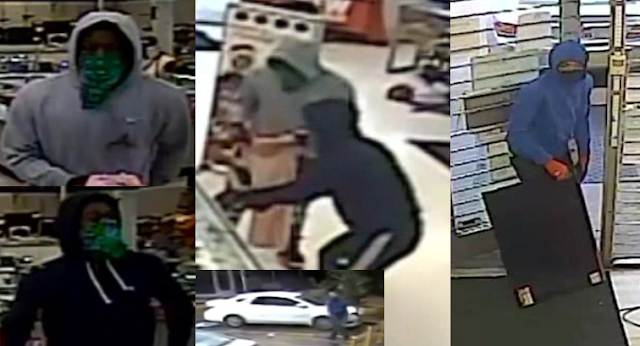 The Houston Police Department’s Robbery Division need the public's assistance identifying the suspects responsible for a robbery by force.

On Saturday, November 8, 2020, at approximately 10:15 am, four unknown male suspects entered a pawnshop, located in the 9300 block of Richmond Avenue, in Houston, Texas. The four males pulled into a parking space in front of the business while the driver remained in the vehicle. Three suspects exited a white four-door sedan (possibly a Nissan Versa), two of the suspects entered the business while the third suspect remained at the door. One suspect used a sledgehammer to smash the display case and take the items from inside the case while the other filled a sack with items from the case. The suspects fled the scene in an unknown direction of travel.

The suspects are believed the same suspects involved in over 20 similar cases within the area. Houston PD #1581856-20