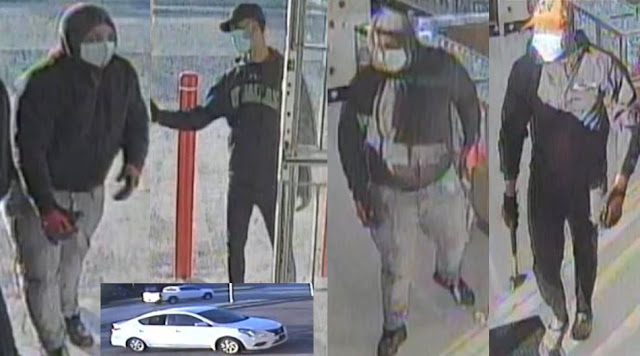 On Sunday, December 6, 2020, at approximately 4:40 pm, five unknown male suspects attempted to rob a business in the 800 block of Uvalde Road in Houston, Texas.  During the incident, five males arrived in a white Nissan, likely a Versa, and three males exited the vehicle.  One male held the door open while two males entered, on carrying a hammer and the other a sack.  The first male attempted to break open the glass display by striking it repeatedly but was unable to do so.  The second male also failed to access the case by striking it with the hammer.  The males then walked out and then ran to the waiting Nissan and fled in an unknown direction.  Suspects are believed to be involved in over 20 similar crimes in the greater Houston area.

Crime Stoppers may pay up to $5,000 for information leading to the identification, charging and/or arrest of the suspects in this case. Information may be reported by calling 713-222-TIPS (8477), submitted online at www.crime-stoppers.org or through the Crime Stoppers mobile app. Only tips and calls DIRECTLY TO Crime Stoppers are anonymous and eligible for a cash reward.