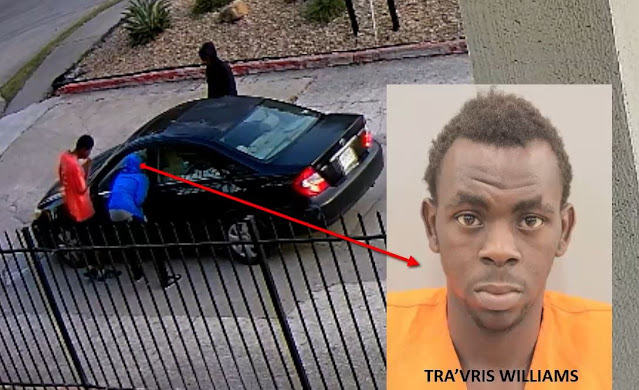 On Wednesday, November 11, 2020 at around 5:30 pm, the complainant, a pizza delivery driver, was delivering a pizza at a business located at the 10000 block of Forum Park, in Houston, Texas. The complainant stated that she was unable to locate the person who placed the order and was in the process of leaving when three unknown males flagged her down. One of the males, later identified as Tra’vris Williams, pulled out a handgun and placed it against her while demanding her property. The other two suspects reached into the vehicle and removed the complainant’s purse and cell phone. The complainant was eventually able to drive off as the suspects fled the location. Houston PD #1503228-20

As a result of a follow up investigation by Robbery Detectives, the identity of one of the suspects was established as Tra’vris Williams (18 years old). Williams has been charged with Aggravated Robbery with a Deadly Weapon. The identity of the other two males is still unknown.

Crime Stoppers may pay up to $5,000 for information leading to the charging and/or arrest of the suspect in this case. Information may be reported by calling 713-222-TIPS (8477) or submitted online at www.crime-stoppers