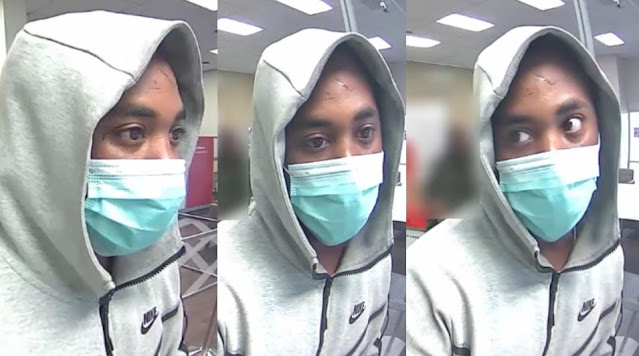 The Houston Police Department’s Robbery Division need the public's assistance identifying the suspect(s) responsible for a robbery by force.

On Saturday, February 13, 2021 at around 1:00 pm, a female complainant entered a bank, located at the 11800 block of Bellaire, in Houston, Texas. The complainant withdrew a large sum of money inside the bank at a teller station, placed the money inside of her purse and then left the location in her vehicle. The complainant then drove to a friend’s house and spent over an hour and half visiting. The complainant then left that location and drove to a supermarket, located at the 9200 block of Bellaire. As the victim exited her vehicle at the supermarket, an unknown male forcibly grabbed her purse (with the money that she withdrew from the bank) and ran to a newer model Chevrolet truck, which was also being followed by a Ram truck, and then fled the location. Houston PD #206156-21

A security guard witnessed the robbery in the parking lot and attempted to stop the suspects, but was unsuccessful.

Note: The same male that stole the victim’s purse was the same male that was inside the bank about two hours prior to the incident. This is believed to be a jugging incident, in which the suspects had targeted the victim (after withdrawing the money at the bank) and then waited for an opportunity to steal it. In these jugging incidents, it is not uncommon for suspects to use numerous vehicles while they are following a victim in order.