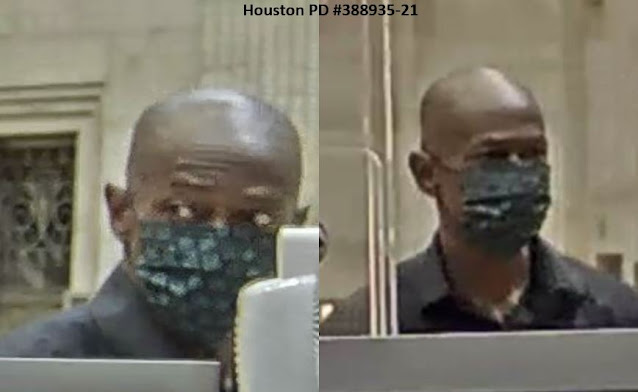 The FBI Violent Crime Task Force and the Houston Police Robbery Division need the public's assistance identifying the suspect responsible for a series of bank robberies in Houston.

On Wednesday, March 24, 2021 at around 1:30 pm, an unknown male entered a bank at the 700 block of Main, in Houston, Texas. The male lingered in the lobby for over ten minutes, writing on deposit slips and using the ATM, before eventually approaching an open teller station. The suspect then presented a demand note written on a deposit slip to the teller that demanded cash and threatened that he had a gun. The teller did not immediately open her teller drawer, so the suspect gestured towards his waistband as though he was going to grab a gun. In fear for her safety, the teller collected an undisclosed amount of cash and gave it to the suspect. The suspect took the cash and left the bank walking onto Travis Street and no vehicle was observed. Houston PD #388935-21.