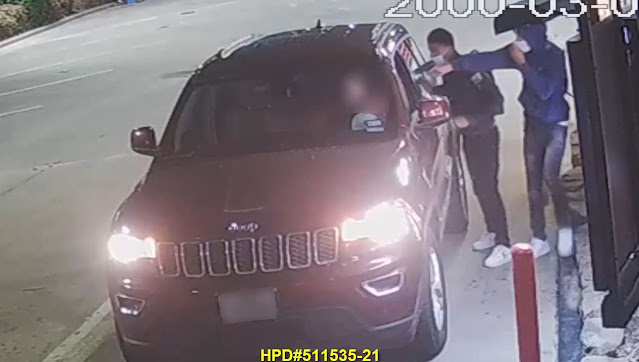 On Sunday, April 18, 2021 at 3:30 am, the complainant had just pulled up to a drive-thru at a restaurant at the 9000 block of Clinton, in Houston, Texas. The complainant stated that two unknown males suddenly appeared while one them was pointing a handgun at him and demanding that he get out of his vehicle. The complainant stated that he put his hands up into the air and then exited the vehicle, at which time both of the suspects got into his vehicle and sped off on Clinton.

A Houston Police Officer located the vehicle traveling at a high rate of speed a few moments later at 11000 block of the East Freeway and attempted to stop the vehicle. The suspects failed to stop and drove to the 6700 block of Bennington, where they exited the vehicle and fled on foot. Officers were not able to locate the suspects after setting a perimeter at the location. Houston PD #511535-21