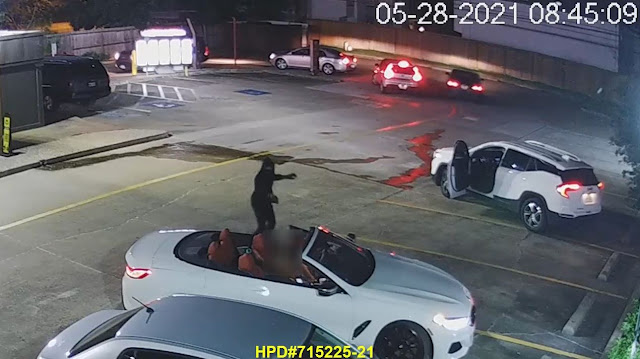 On Friday, May 28, 2021 at around 8:50 pm, the complainant stated that he pulled into a fast food restaurant parking lot in order to grab a shirt from his trunk at the 3100 block of Fountain View, in Houston, Texas. The complainant stated that as he walked back to his driver’s side door, an unknown male approached him while pointing a gun at him and demanding his property. The complainant resisted with the suspects demands and began to grab his own gun, at which time the suspect started shooting him, striking him seven times throughout his body. While being shot at, the complainant was able to fire his own weapon back at the suspect, who was possibly struck as well. The complainant was able to get back into his vehicle and drive away in order to get help. The suspect also made his way back to his vehicle, described as a small white SUV, and fled the scene. Houston PD #715225-21

The casings that were recovered from the suspect’s weapon have been linked to an aggravated robbery that occurred on May 7 at the 2700 block of Travis. In that case, the complainants had just exited their vehicle and were approached by an unknown male, who was pointing a gun at them while demanding their property. Both complainants ran from the suspect, who then shot at them twice, narrowly missing them. Houston PD #606316-21

Note: The complainant survived his injuries and was released from the hospital two days after being shot seven times. The complainant suffered gunshot wounds to the chest, four to the left leg, one in left hand and one in the right leg.