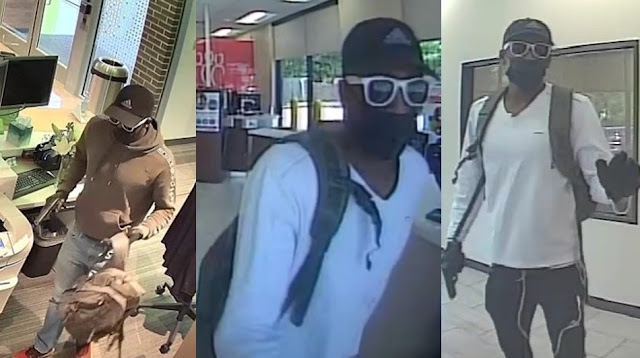 The FBI Violent Crime Task Force needs the public’s help identifying and locating a suspect dubbed the “Backpack Bandit” who hit two west Houston banks in two days. Crime Stoppers of Houston is offering a reward of up to $5,000 for information that leads to the identification and arrest of the robber. He used a military green or khaki backpack during both robberies.

At approximately 1:30 p.m. on August 25, 2021, a man entered Regions Bank located at 1502 Eldridge Pkwy. He walked behind the teller counter, pulled out a gun, and ordered the employees to give him cash. The suspect placed the undisclosed amount of money in a military green or khaki backpack, left the bank and was seen walking south through the parking lot. Houston PD #1148137-21

The same man is believed to have robbed another bank at approximately 11:24 a.m. on Thursday, August 26, 2021, at the Member’s Choice Credit Union located at 1657 S. Fry Rd. in Katy, TX. He entered the bank, immediately pulled out a gun, corralled all employees behind the teller counter, and demanded cash. The suspect went behind the teller counter and placed an undisclosed amount of money into the same military backpack he had used the day before. After leaving the bank, he was seen running around the shopping center to the back of the bank.  HCSO #2108-10270

Witnesses described the “Backpack Bandit” as a black male in his late 20s or early 30s, approximately 5’11” tall, with a thin build. On Wednesday he wore a white long-sleeved shirt, black Adidas track pants, and black sneakers. On Thursday he was dressed in a brown hoodie with a stripe down the sleeves that read “Los Angeles,” blue jeans, and orange or red sneakers. During both robberies, the man wore white-framed sunglasses, a black Adidas baseball cap, a black COVID mask, and black gloves.

Crime Stoppers may pay up to $5,000 for information leading to the identification, charging and/or arrest of the suspect in this case. Information may be reported by calling 713-222-TIPS (8477), submitted online at www.crime-stoppers.org or through the Crime Stoppers mobile app. Only tips and calls DIRECTLY TO Crime Stoppers are anonymous and eligible for a cash reward.