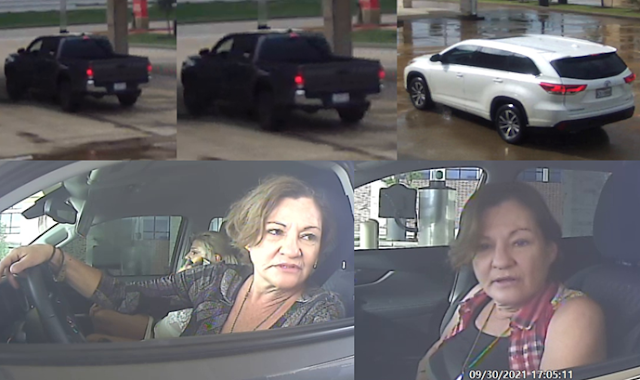 The Houston Police Department’s Robbery Division need the public's assistance in identifying the suspect(s) responsible for fraudulent use of identifying information stemming from a series of robbery/theft cases.

On Thursday, September 30, 2021 and Friday, October 1, 2021, an unknown female attempted to cash a check using a theft victims check at a bank, located at the 1300 block of North Sam Houston Parkway, in Houston, Texas. The female suspect used the victim’s identification card along with her debit card and was successful on the first attempt, but one the second attempt, the bank sized the ID when they realized that the person on the ID was a different person from the person attempting to cash the check. The female then fled the location. Houston PD #1285124-21

In the theft case, the complainants were getting water from a water station, located at the 11500 block of Hughes Road, in Houston, Texas. Both of the complainants had stepped away from their vehicle while filling a tank up with water, at which time, a white Dodge Charger pulled up next to their vehicle. An unknown suspect then exited the car, quickly opened their car door, and removed the purse and cell phone from the vehicle. The suspects then fled the location.

The same suspects are believed to be responsible for at least five similar thefts and robberies. In the robbery cases, the suspect will approach the female victims while in their vehicles, open the passenger door, and then grab their purses. The suspect use the same white Dodge Charger in all the cases. At the time of this release, the male suspect has not been captured on camera in any of the incidents.

Suspect in fraudulent use of identifying information: White or Hispanic female.