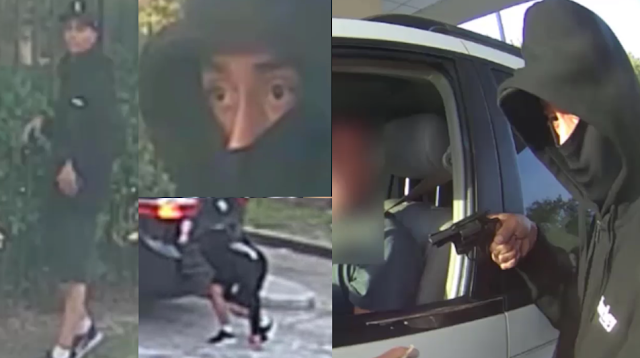 The Houston Police Department’s Robbery Division needs the public's assistance identifying the suspect responsible for an aggravated robbery with a deadly weapon.

On Wednesday, October 20, 2021 at around 8:25 am, the complainant was withdrawing money from an ATM while in his vehicle at the 2200 block of the Gessner, in Houston, Texas. The complainant stated that an unknown male suddenly appeared while pointing a gun at him and demanding his money. The complainant complied with the suspect, gave him the money from the ATM, and then drove away from the location. The complainant stated that he then circled back and called the police. A second complainant then pulled up to the ATM and was also robbed by the same suspect.  The suspect then ran across the street, got into the passenger seat of a green Toyota SUV, and fled the location. Houston PD #1413777-21