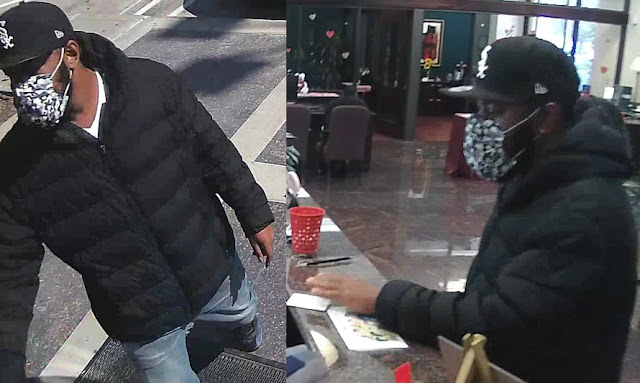 The FBI Violent Crime Task Force seeks the public’s help in identifying and locating a man who struck two Houston banks in less than a week’s time. Dubbed “Lunchtime Looter,” he hit both banks in the middle of the day.

At approximately 12:30 p.m. on Friday, January 28, 2022, “Lunchtime Looter” walked into the IBC Bank located at 3200 Woodridge Dr.  He gave a threatening note that demanded cash to a teller. After the teller complied the suspect left the bank with an undisclosed amount of money. Witnesses saw him drive away in an older model silver Hyundai Elantra.

Next, at approximately 11:00 a.m. on Wednesday, February 2, 2022, the same man is believed to have walked into the Wells Fargo Bank, located at 10261 North Freeway. He gave a threatening note that demanded cash to a teller. As the teller collected cash for the suspect, a manager approached him, and “Lunchtime Looter” verbally demanded money and threatened to shoot if the employees did not comply. The teller gave the man an undisclosed amount of money and “Lunchtime Looter left the bank. Houston PD #122207-22

Witnesses describe “Lunchtime Looter” as a Black male with an olive complexion and freckles around his eyes. They also said the suspect is approximately 6’0” tall, in his early 30s, with a medium build. The man wore a puffy black jacket, a black Chicago White Sox baseball cap, and a black and white mask while committing both robberies.  HCSO #2022-00607

Crime Stoppers may pay up to $5,000 for information leading to the identification, charging, and/or arrest of the suspect in this case. Information may be reported by calling 713-222-TIPS (8477), submitted online at www.crime-stoppers.org, or through the Crime Stoppers mobile app. Only tips and calls DIRECTLY TO Crime Stoppers are anonymous and eligible for a cash reward.