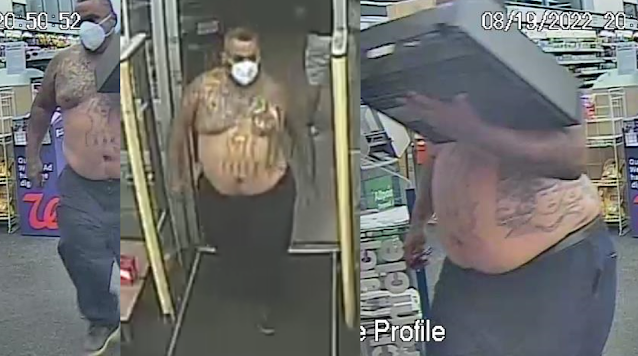 The Houston Police Department’s Robbery Division needs the public's assistance identifying the suspect responsible for series of aggravated robberies at drug stores in the City of Houston.

On Friday, August 19, 2022 at around 8:30 pm, an unknown male walked into a drug store, located at the 2800 block of Gessner, in Houston, Texas. The male walked up to the employee at the front counter, pulled out a knife, and demanded the money from the cash register. The suspect then grabbed the till containing the money and walked out of the store, fleeing in a white Hyundai SUV. Houston PD #1114805-22

The suspect is also responsible for the following robberies, which were committed in the same manner, except the suspect was said to be armed with a rifle in one of those robberies.

Suspect description: Hispanic male, 40 to 45 years old, 6’0, heavy set, 230 to 260 pounds, driving a white Hyundai SUV. The suspect also walks with a limp and has tattoo’s throughout his body.